Hi,
I’m trying to visualise the locale and task concepts using a diagram.
This is my attempt, I hope I understand correctly, a locale can have multiple processors and storage capacity. 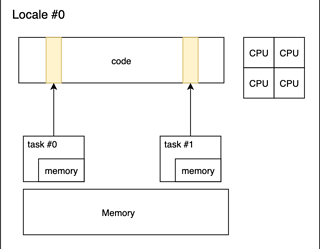 Are there anything else I can add to it? Or anything wrong with it?
Thanks.

I think that’s a reasonable sketch of what a locale looks like. A few refinements to consider would be: